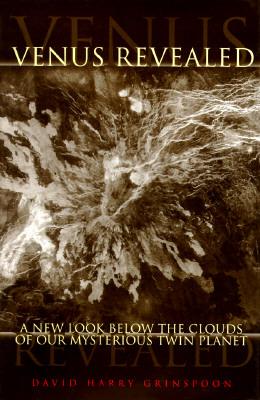 In Venus Revealed, planetary scientist David Harry Grinspoon takes the reader on a lively jaunt through the history of our relationship with the planet Venus. Ever since the ancient, unrecorded moment when humans first started looking up and noticing that one “star” was brighter and behaved differently from all the others, Venus has played an important role in the evolution of human ideas. Venus is the Earth’s twin, seperated at birth 4.5 billion years ago. Venus, the brightest planet in the sky and the closest to Earth, is also the most Earthlike planet in many ways, and a world rich with insights and lessons about the most crucial environmental tests facing our home world.

For thousands of years Venus has been a celestial object of worship and wonder. Mayan astronomer-priests and ancient Sumerians tracked the movements of Venus in the sky and told stories of Venus’ underworld exploits in the service of humanity. For millennia we watched, worshiped, feared and sought guidance from “morning star” and “evening star”. For hundreds of years Venus has been an object of telescopic observation and fantasy. Paradoxically, Venus’ great, attention-grabbing brightness in our evening and morning skies results from the same feature which has made the true nature of this world so elusive: the planet is completely shrouded in bright, reflecting clouds that keep the surface hidden. We constructed an elaborate fantasy of a world very much like our own, probably inhabited and stuck in an earlier, more primitive stage of development, a living fossil of Earth’s past, or perhaps even the garden from which we had banished ourselves.

Beginning in 1961, Earth launched a fleet of spacecraft, like giant metal insects, to explore the planets, starting with Venus, and these aliens began to “phone home” with pictures and tales of worlds stranger than we could have imagined. For the last 35 years we have been trying to peer beneath that unyielding cloudy shroud. Finally, beginning in 1990 a spacecraft called Magellan began to reveal the face of our planetary twin. We have found an Earth-sized planet with ongoing geological activity, and intricate cycles of matter and energy with complex feedbacks that we’ve barely begun to understand. Like Earth, Venus is alive and kicking. Our twin has important tales to tell us regarding several of Earth’s most pressing environmental problems, including ozone destruction, global warming and acid rain.

Employing a conversational style full of humor and sprinkled with references to literature, music and pop culture, Grinspoon will make you think, wonder, shake your head and laugh out loud. Venus Revealed is illustrated with striking spacecraft images, many never before published, of the eerily familiar landscapes of Venus. This book makes a compelling case for comparative planetology as an important tool for gaining human self-knowledge, knowledge that is vital for our long term survival on our own planet.

To learn more about Venus, check out these web links: