Astrobiological view might help us save planet: Nice write up of EARTH IN HUMAN HANDS in the Register Guard.

“The first step for change, said Grinspoon, is to understand that “the past is no longer the key to the present.” Humanity faces threats that are fundamentally different from those of even 50 years ago, and to survive we must once again swiftly adjust our thinking and behavior.

Both tremendous invention and self-restraint will be required. This can happen if we always keep the picture of the Blue Marble front and center in our minds. Every decision and every project can then be grounded in the understanding that we live on a finite planet. We can then reorient our scientific and technological prowess to focus on how to live happy and meaningful lives by restoring rather than further degrading our only home.

Grinspoon calls this a much-needed new “planetary intelligence.” He closes his book by stating it is time to “human up.” It won’t be easy, and there will be much pain along the way. But he said he is confident we can make the changes. Given the many challenges we face, I welcomed Grinspoon’s optimism.”

How can we get an “outside perspective” on our situation here on the home planet?  This question is explored in this new interview I did with the show “How on Earth” for KGNU Radio about Earth in Human Hands.

A Really Nice Review of Earth  in Human Hands in Astronomy Magazine!

Rarely is a science book profoundly informative, highly entertaining, and surprisingly filled with interesting tidbits as a memoir. Such is the case, however, from the new book Earth in Human Hands: Shaping Our Planet’s Future, by planetary scientist David Grinspoon…

…This is a book that any thinking person will have been glad to read. One could hardly ask for more from a well executed book on science.

Humans have been altering Earth for millennia, but only now are we wise to what we’re doing. How will we use that wisdom? (excerpt from EARTH IN HUMAN HANDS.)

Look some snarky inactivist named Dave Cohen has written a mean-spirited critique of my Aeon piece and some of the ideas in EARTH IN HUMAN HANDS. Funny thing is, without even knowing him, I wrote a description of this guy on pages 445-451 of the book “The Power of Negative Thinking”. I doubt he will ever see it though – doesn’t seem like the type to dive deep and actually read books…

One of his points seems to be that he doesn’t like my profession or the city where I live, and he thinks these invalidate my views: He astutely describes me as:

“an astrobiologist who lives in Washington D.C? Maybe we’ve identified the problem right there…”

This is a brilliant comment! We should pre-judge all ideas by the geography and profession of their authors (even if, as in this case, I am new to this part of the world and my ideas were mostly forged elsewhere – ah well, such details do not serve the all important snark of this piece…)

Another point is that he doesn’t like the fact that I am trying to sell my book. He says:

“Really, what is this douchebag doing? He’s selling his new book.”

Any of you writers out there (or anyone who makes a living creating, and trying to sell, anything) care to comment on this criticism?

And then, quoting my line that “Self-concious global change is a completely new phenomenon” he imagines he is cleverly refuting me by saying

“Regarding humanity as a whole, one might say alternatively that “self-conscious global change” is certainly something we might wish for, considering that it it does not exist. It certainly would be a new phenomenon.”

Here he thinks he is making a clever retort, but does not realize that he is practically paraphrasing one of the main points of my book.

Then he makes some unsubstantiated, definitive and overconfident assertions about his immutable and dismal views of human nature.  This guy is quite certain he understands the essence of humanity and that, basically, we suck and there is nothing that can be done about that. So lets all just write snarky posts about how much we suck until the world ends.

Guys like this are part of the reason our species is not progressing toward planetary wisdom as fast as we could. Some people are so convinced that we can do no better, all they do is sit around taking pot-shots at those who advance visions of change and growth.  However, I do very much like the fact that (after calling me a douchebag and saying my writing makes him want to vomit…. My, what a pleasant human being he is!!) he ends his corrosive rant by showing my book trailer video, where I lay out (the 2 minute version of) the rationale and vision of  EARTH IN HUMAN HANDS.  This is by far the best part of his blog post. I’m quite sure that some of his readers will watch this at the end of his rant, and will then take away my constructive vision, finding it more appealing and well-informed than the aftertaste of his tired fatalistic bile.

Thick skin is of course required whenever you put something out in the world, so I am prepared to be challenged by intelligent and insightful critiques of my work.  This rant, I’m afraid, does not rise to that level but does illustrate the points I make on pages 445-451 of EARTH IN HUMAN HANDS.

In case some of you don’t read that far, here is one quote from that section of the book:

Currently I feel that spewing misanthropy and random anti-human sentiment is just as dangerous as emitting CO2 into the air. It is the opposite of activism. I know that people spreading these messages mean well.  They want to shock others into realizing the effect we’re having on the planet, but there is a real danger of unintended consequences, of encouraging people to give up. Spreading messages of doom is a form of inactivism.

From 70 books to make you feel hopeful: An end-of-year reading list by IDEAS.TED.COM.

When you’re looking for a completely different perspective on life

Earth in Human Hands: Shaping Our Planet’s Future by David Grinspoon
Who knew that taking an interplanetary, billion-year view on our environmental troubles could inspire such optimism? Grinspoon is a planetary scientist, and he thinks big — very big. He’s also hopeful that as we mature as a species, we will become ever better at preserving all species, controlling climate change and thinking about ourselves as part of one vast interconnected biosphere.
— Emma Marris

A Planet With Brains? The Peril And Potential Of Self-Aware Geological Change.
by David Grinspoon. 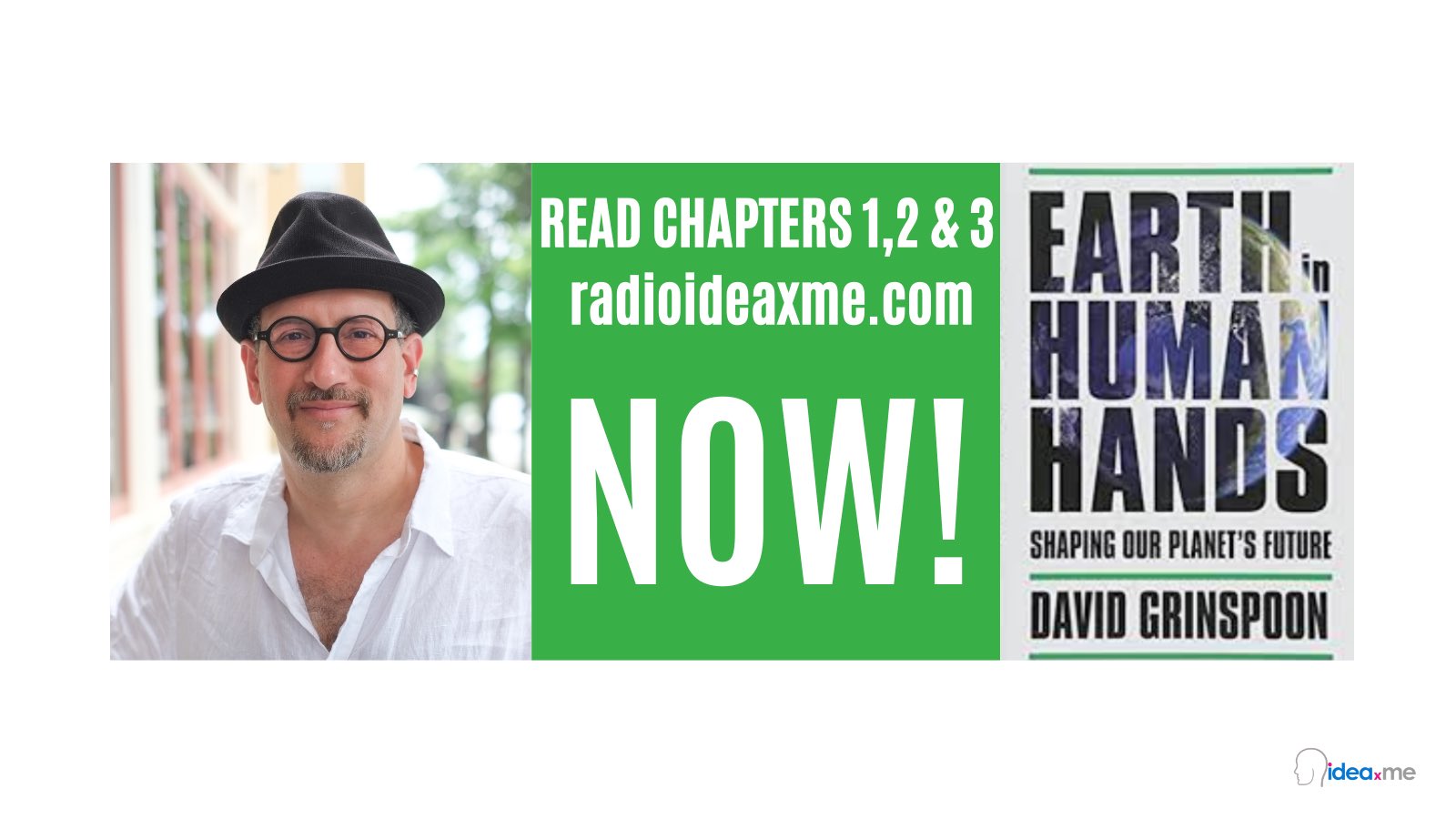 h J R
David Grinspoon @DrFunkySpoon @RDSitze 😎 I don’t have much of my music online - should put more up. https://t.co/Lzr5GGspjF

h J R
David Grinspoon @DrFunkySpoon @EdB_Ohio I don’t think it was the music. I think he’s mad that I said that some UFO evidence might be suspect, so he would devastate me or something. What a creep. But also: poor guy.