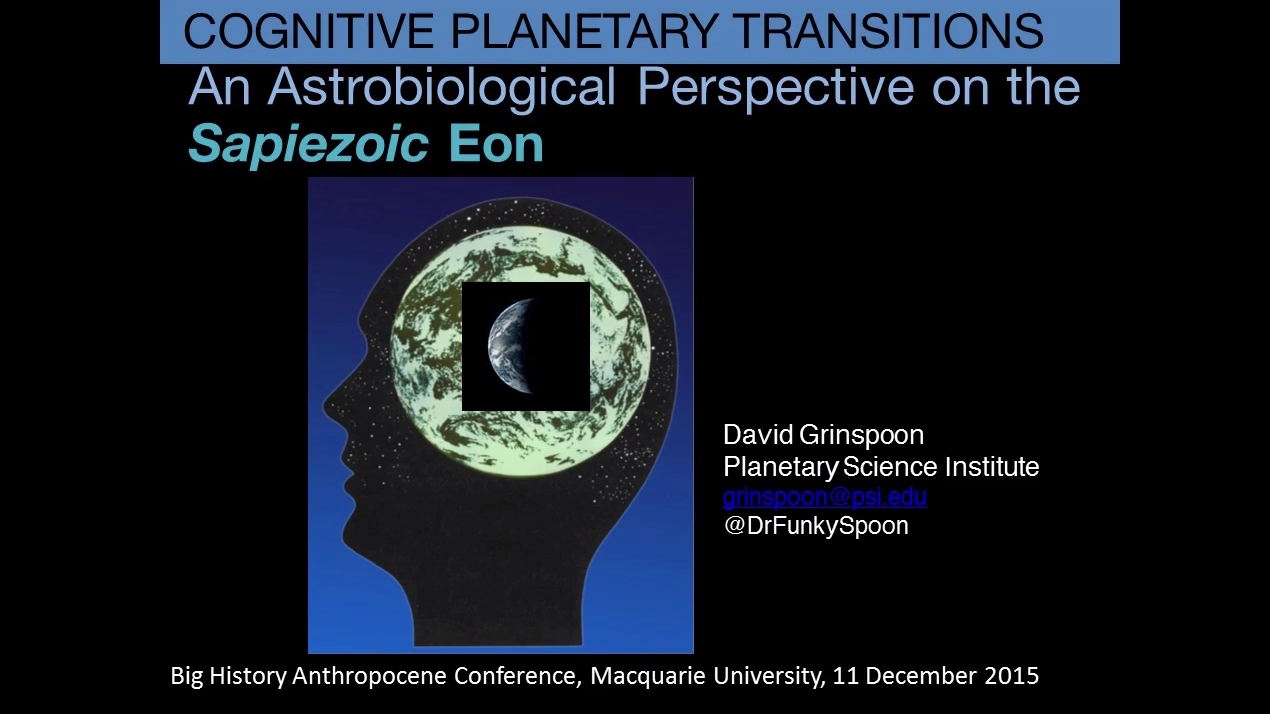 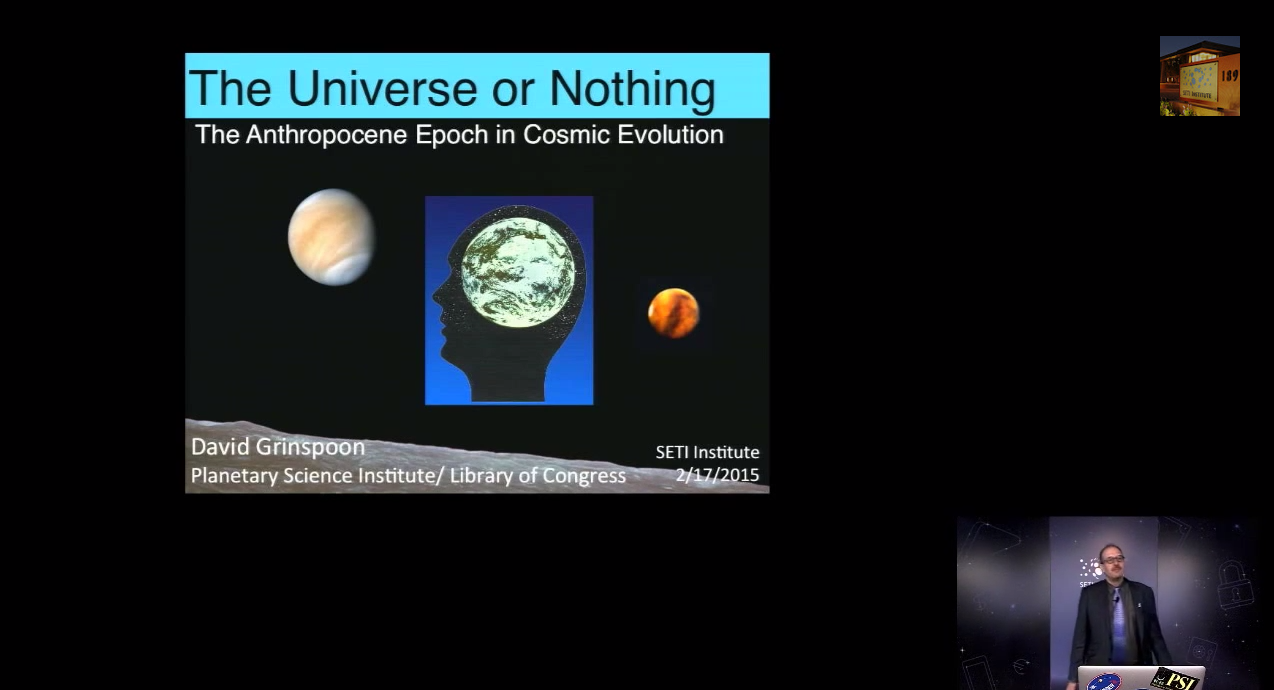 David discusses the Earth as being a living system, examining it through its history and how life and humans have shaped and changed Earth’s appearance over time, in a TEDx talk titled “Planetary Changes of the fourth kind”. Click the image below for the Video. 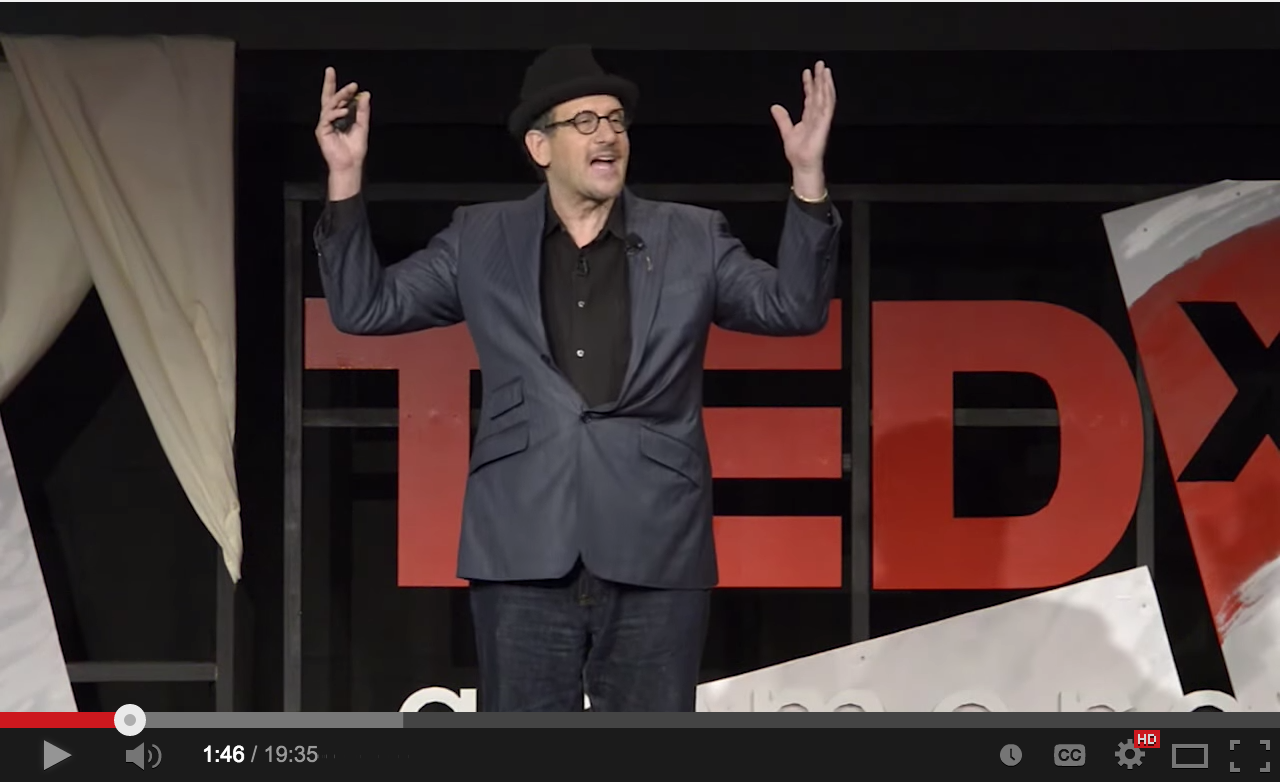 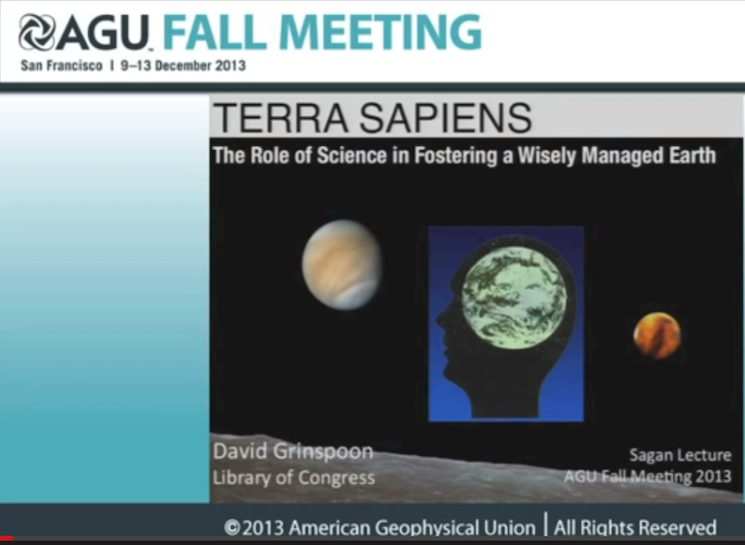 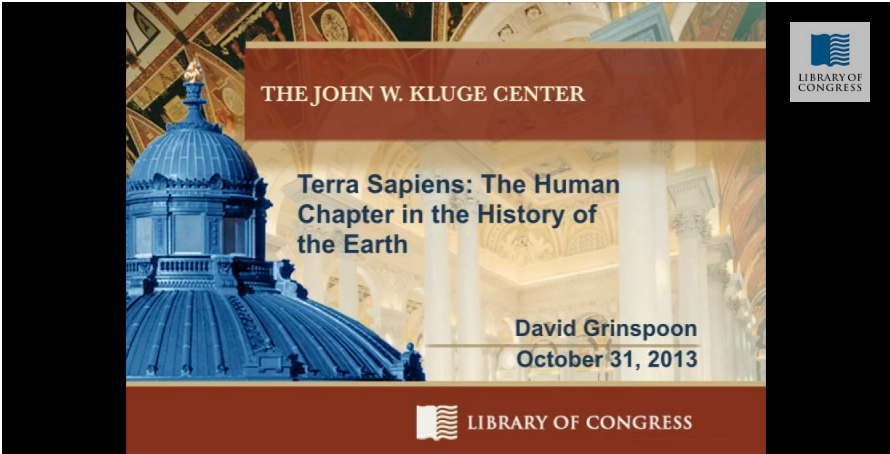 9/12/13 – Washington DC, at the Kluge Center at the Library of Congress 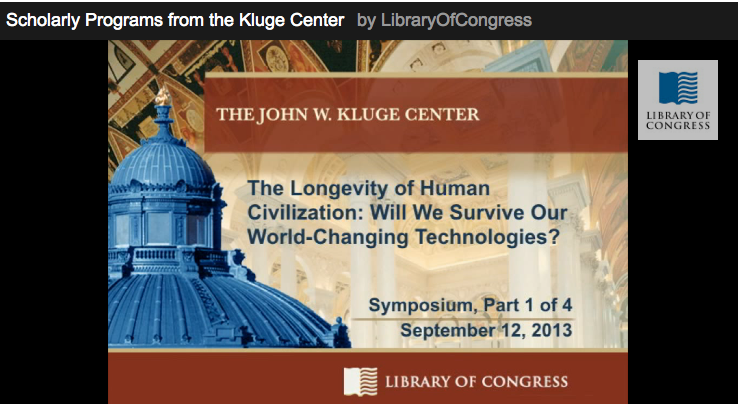 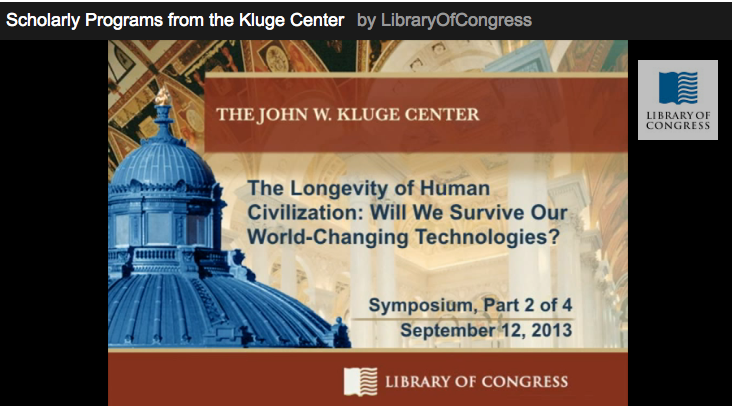 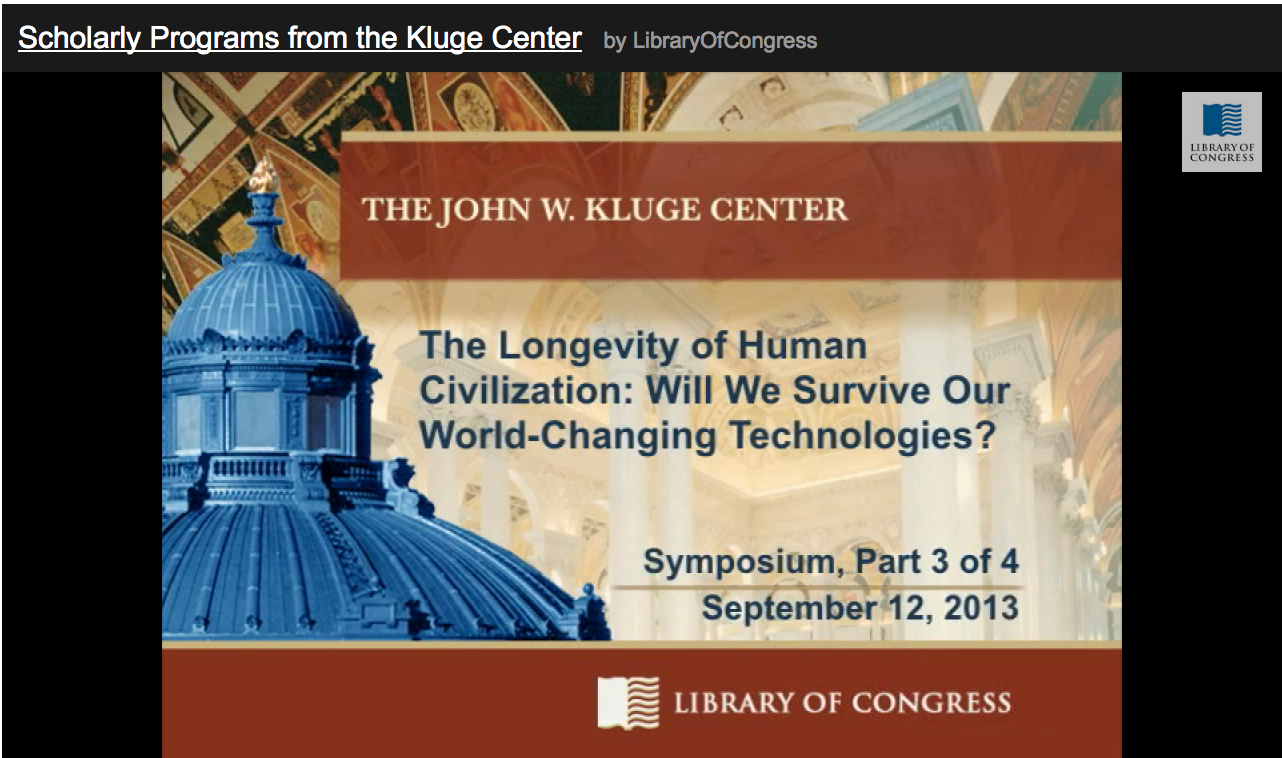 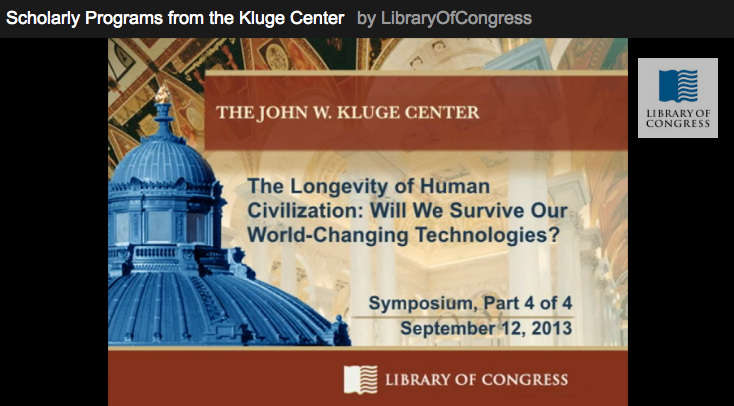 5/23/13 – Washington, DC at the AAAS Art Gallery
David is one of four panelists discussing space careers to a group of over 100 middle school students.

5/7/13 – Comparative Climatology Symposium at NASA HQ in Washington, DC
David presents on the subject of comparative climatology and it’s importance as an emerging area of research. Click here for his presentation slides. Click the image for the video. 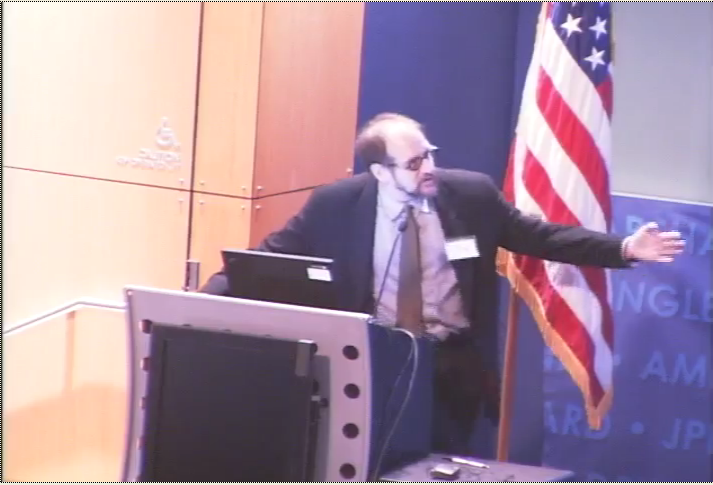 4/17/12 – Atlanta, Ga at the Astrobiology Science Conference – (AbSciCon 2012) David participates as moderator in a plenary session titled: The Great Exoplanet Debate – which has a full length recording and has also been scribed into nine sections. Click the image below for the full recording of the debate and click below for the text version of each part:

6/26/12 – In Boulder, Colorado, Bill Nye hosts the public event “Climate Change on Earth and on Other Planets” a panel discussion at the Boulder Theater. David is featured at 1 hr:14 min

4/4/12 – At Case Western University, Grinspoon presents an interplanetary perspective on climate change. What happened to the lost oceans of Venus and Mars? In this 90-minute lecture, Grinspoon discusses how studying the evolution of other planets contributes to understanding and predicting climate change on Earth. He leads us on a journey through the solar system—and deep time—discovering runaway greenhouses, snowball planets, and the long-term fate of Earth.

Life Out There (Full Performance) from DMNS on Vimeo.

5/27/11 – At Dartmouth University at the 2011 Jones Seminar on Science, Technology, and Society, David talks about “What is Life, and How Should We Look for it Elsewhere in the Universe?”

8/31/10 – Madison, Wisconsin – David gives a public lecture in Madison during the International Workshop on Venus Exploration 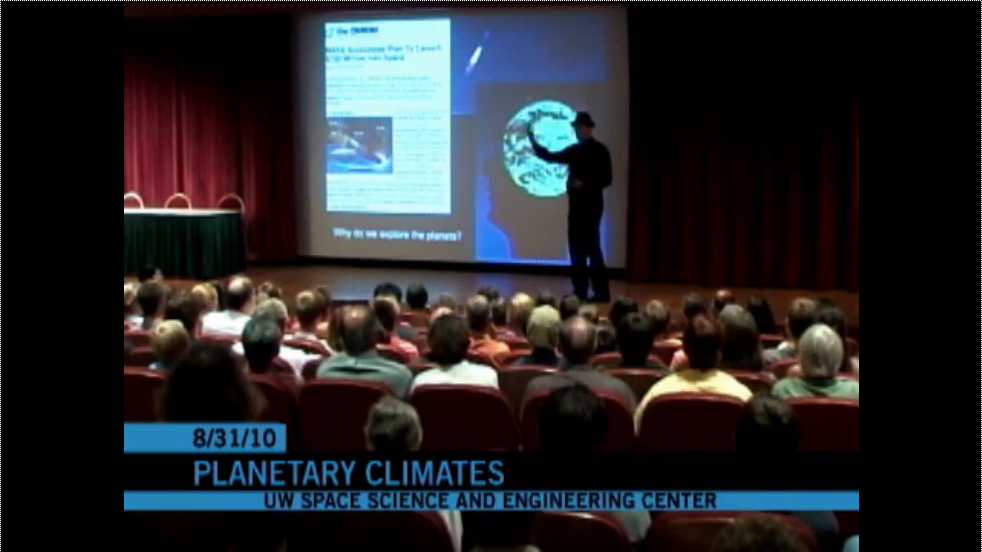 5/24/10 – An episode from Science Bites – A short film series at the Denver Museum of Nature and Science, David talks about recent evidence for vulcanism on Venus.

11/7/2014 David is interviewed on “Inquiring Minds” Podcast, with David Corn, about the blockbuster Interstellar that recently came out in theaters. Listen here!

4/2013 David Discusses: The Human Role in Earth Evolution: Will the Anthropocene be an Event, An Epoch or a Transition? In the April edition of Beer with Blue Marble Space Institute of Science. Click the link above for more information.

3/1/2014 – David is interviewed with the Mile High Sanity project’s “Alternative Thought” broadcasts. David answers questions such as “are we alone in the Universe?”, “Can we communicate or travel to other planets?”. Listen HERE!

2/17/2013 – David is interviewed on the Wow! Signal podcast – “A conversation about alien life with Dr. David Grinspoon, author of Lonely Planets.  We talked about his career as ab astrobiologiest, about the habitability throughout the solar system from Venus to the moons of Saturn, a proposed Venus ballon, the Curiosity rover on Mars, his upcoming book, his band, and more.” Listen here.

6/5/12 – The Venus Transit – David Grinspoon talks to the BBC about why a little black dot (Venus) moving in front of a big yellow sphere (the Sun) is so cool and scientifically important. Listen here and skip to ~12:00 to get directly to David’s interview.

7/31/05 – David Grinspoon on “Lonely Planets”, interview by Anne Strainchamps of Wisconsin Public Radio: David Grinspoon is the author of “Lonely Planets: The Natural Philosophy of Alien Life.” He tells Anne Strainchamps we’re more likely to find microbes, but can’t help longing to find other creatures to talk to, and that if and when we do, such a find will pose a big challenge to traditional religions. Does every life form rank its own Redeemer, or is Jesus Christ, as some have maintained, a planet-hopper? Listen to the interview here.

12/20/03 – NPR’s Scott Simon talks with David Grinspoon, author of Lonely Planets: The Natural Philosophy of Alien Life about the possibility of other forms of life elsewhere in the universe or maybe right here on Earth. Listen here.