How can we get an “outside perspective” on our situation here on the home planet?  This question is explored in this new interview I did with the show “How on Earth” for KGNU Radio about Earth in Human Hands.

Interview with the Denver Post about Earth in Human Hands and why, ultimately, the future may be bright.  Read it here.

Miles Traer from Generation Anthropocene is a smart guy and I always enjoy talking to him. He had read the book and he asked great questions. This is a good interview to give you a sense of what the book is about and how a deep-time view of the human experience can change our perspective, and perhaps help us to survive.  Listen here.

Read the questions and responses here.

A nice relaxed long-form discussion about several of the topics that come up in EARTH IN HUMAN HANDS.

We discuss what I call the Great Promotion: Carl Sagan used to talk about the “great demotions” of the last 400 years which showed us, through a series of scientific revelations just  peripheral, and irrelevant we are in the cosmos, and how unimportant we are to the planet. And yet we are now, by suddenly realizing that we are in this new “anthropocene” age of humans as a geological force, discovering just the opposite. We are no longer peripheral. We’ve been unwittingly getting a “great promotion” to a central role in the drama playing out on Earth right now. We may not be able to handle this job, but the first step is to accept that we really are, in some ways, in control of Earth right now. To deny this is to avoid responsibility.

I also discuss what I call the “anthropocene dilemma” that arises when a species has planet-changing technology but no global system of awarness and control of the effects of this technology.  And I give some examples that suggests we have the capacity to overcome this dilemma and develop the capacity to make intelligent global decisions about how to deploy technology for the betterment of our civilization, of other species and of the biosphere as a whole.

We discuss SETI and its connection to ideas about our own potential longevity as a civilizaiton with planet-altering technology. Can a civilization with planet-changing powers, develop a sustainable long-lived presence?

And we discuss the asinine story that the new president intends to direct NASA to abandon research into Earth science and just focus on outer space.  This can’t happen and here I say why.

These topics and more were covered in this enjoyable conversation.

An Astrobiologist Asks a Sci-fi Novelist How to Survive the Anthropocene. 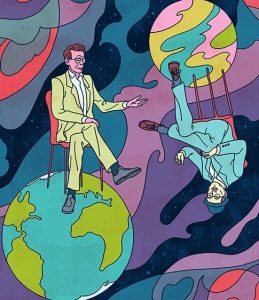